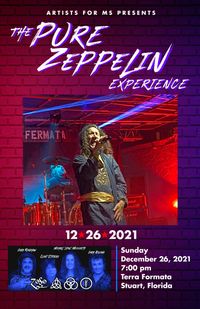 WE ARE BRINGING IT A FULL BLOWN 70S ROCK SHOW WITH AN AMAZING LIGHT SHOW ITS BEEN A LONG TIME SINCE WE ROCK AND ROLLED ears ago in days of old, when magic filled the air …

Anyone lucky enough to see Led Zeppelin in concert in the ‘70s came away changed – visceral and tough, the music entered your body, through bone and muscle, and shook you to the very core. The unprecedented mix of power and passion – for the lyrics were sometimes delicately paired with the most combustible music and melodies – made for a rock ‘n’ roll experience unmatched, before or since.

Guitarist Jimmy Page summed up his band thusly: “Power. Mystery. And the Hammer of the Gods.”

The hammer has been passed to The Pure Zeppelin Experience, a Florida-based tribute band that reproduces a full Zeppelin concert, the madness and the majesty, to thrilling, chest-pounding effect. These are veteran musicians who’ve sold their souls for a one-way trip on the Stairway to Heaven.

Michael “Spaz” McGoorty, whose dynamic stage presence and a blistering, multi-octave voice make him the heir apparent to Zeppelin frontman Robert Plant, is lead singer. “It’s that ‘blues and whiskey’ voice,” McGoorty says. “He puts everything he has into it – he really spills it. Like I always have, too.”

From “Dazed and Confused” and “Ramble On” to “Over the Hills and Far Away” and “Kashmir,” The Pure Zeppelin Experience is the musical, physical and spiritual manifestation of the great Led Zeppelin, for our times. Their explosive show, goes for the deep, deep cuts as well as the more well-known Zeppelin numbers.

If it’s been a long lonely, lonely time since you rock and rolled, The Pure Zeppelin Experience is the answer. The songs remain the same, but come and see this band – they’re gonna make you sweat, gonna make you groove. Guaranteed.